Dear New Balance, what the fuck are these? I know they resemble the 580’s, but they seem to have been butchered by a gay clown on an acid trip. I know that you guys are trying to get away from the traditionl grey suede, fratstar look, but did you really have to go and get Perez Hilton to design your newest colorway? I will always remember what a very successful friend of mine once told me, “Always dance with the one that brought you.” These are not the ones that brought you, New Balance. These are fugly and boujee as shit.

Another question, why the fuck are they Gore-tex? It must be for when Boy George is at the local boys club and Clay Aiken accidently spills his Pomegranate martini on them. That’s the only logical reason I can come up with to make a classic like the 580, and turn it into a rape victim that happens to be waterproof. All the club banging gay clowns are going to be repping these so hard!

Here’s an example of how New Balance got a new colorway of an old model right. Tweaking your bread and butter with a little bit of flavor to reinvent a classic. These are right in your strike zone NewB, and yachty as fuck. 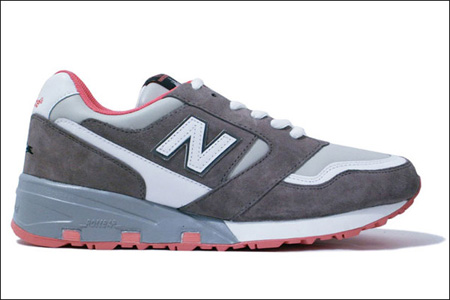 Sometimes good music finds you.
While at Summerfest in Virginia Highlands, one of my good friends and his wife were discussing their plans for that evening when they mentioned they were going to see Passion Pit at the Drunken Unicorn. Just the name “Passion Pit” sounded like a rager of a name for a band so I determined I need to know more about these indie fockers. This couple also has impeccable taste in music so I instantly became intrigued.
I started asking around and soon realized this was one hot ticket and that I needed to be IN. They informed me that the show was sold out so I did what any savvy fucker would do and looked up tickets on Craigslist from my iPhone. I saw a shiesty hipster was selling two tickets for $60 bones (3x face value) and emailed that Van’s wearing, flip-billed fucker to see what the bizness was on the tix. He emailed me back within 5 minutes and was already at Summerfest just waiting for The Don to come pick up tickets.
My friends and I stopped by the ATM and walked out the door and the cut-off short sporting hipsteroni was posted there looking stupid and I knew this was my guy. I handed him my toilet paper ($), grabbed my tickets, kicked him in the shin, and walked back to the Summerfest to party with the plunder.
Fast forward 5 hours, 15 tall boys, and 4 capiranhas later and I was standing at the door of the Drunken Unicorn with a pocket full of funky pre-rolled joints and a smile on my drunken face. We went inside the hotbox of a music club and the room was as crowded as Mormon household. Little did I know that I was about to be blown away by fantasmic awesomeness.
BAM! They started ripping, everyone was sipping, and the whole room started tripping! The lead singer Michael Angelakos was raging vocals and the keyboard, while the rest of the band pumped an absurd amount of energy into the room. I was jumping up and down within thirty seconds (the cool, collected, even-keeled kind of jumping) and stepping on hipster toes like it was my job. I couldn’t believe how sharp the eighties-sounding electronic music blended in perfectly with Angelakos high-pitched, Prince-esque falsetto vocals. They had the entire room captivated and in between songs, I looked around the room and made eye contact with all my peoples and they were nodding their heads like “Told you so, you cocky fucker.” Passion Pit was making it look easy and I instantly became a fist-pumping proponent of their steez.
Passion Pit’s new album, Manners, is going to sell a hell a lot of albums and it literally has been the only album that has been played in my Lambo since the show on Saturday. Although some songs can be a tad on the cheesy side, you can’t help but love them. “Little Secrets” has the addictiveness of “Kids” by MGMT and is sure to be a hit in the coming months. “The Reeling” is a bodacious rager that infuses serious beats and trancelike lyrics that get you hooked like CRACK. “Swimming in the Flood” is a melodic wonder that really gets that good feeling going. I usually don’t give this much props to a band but every song on Manners is smile jerker and it’s definitely worth the $8 dollares on iTunes.
After the show, the kind gents at the Drunken Unicorn opened the floodgates into MJQ where the party continued. I proceeded to get my steez on to “Shorty Swing My Way” mixed with “I’m on a Boat” (brilliance) in MJQ where the party stayed out of control. I was smoking a fatty while watching b-boys do their thing when my friend tapped me and motioned behind us, where all the members of Passion Pit were raging. I turned and gave them props and offered them some tokage of appreciation. They obliged, which reconfirmed my suspicion that they were most certainly a yachty group of cats. I then proceeded to smoke j’s with most of the dudes from the band while I continued to fall deeper into the perils of a Saturday night and completely forgetting about my sister who was waiting outside for an hour.
All in all, I had a radical Saturday and found one of my new favorite bands that is most certainly on a boat. Passion Pit is for the fucking win and I highly recommend these hipsters to anyone that likes good music.

Twitter is an amazing tool that has taken over the world of social networking. While it can be a legit tool used to keep in touch with friends and update people on the latest happenings, there are alway the shameless self-promoters who use it strictly to jack off to themselves and try and become famous (if they aren’t already). I never cease to be amazed at the DOUCHEBAGGERY of some people on this site. So, as party of my newy created blog, every week I will single out a new Twitterbag and cite some of their “tweets”, and subsequently rip on them.

Ladies and Gents, this should be fun, let the ripping begin.

I’m going to start off by asking you fuckers how the fuck this fucker got 50K followers. I know at least 4 of my pubic hairs that are cooler than this dude.

I’ll admit, I have watched The Hills, thus, I have the utmost credibility in ripping on this guido fuck. If you have heard him speak on The Hills, then you might feel bad for him because he talks like he’s mentally retarded, but don’t let him fool you, he’s a club promoter! I think he majored in club promotion at Harvard or Stanford, I’m not sure which one though. Wait nevermind, he’s just a douchebag that happens to hang out with other retards, and those autistic fucks happen to have a tv show. Please look at that grin, if that doesn’t scream “I suck cock”, I don’t know what does.

Lets translate a few of his tweets:
“I’m gonna go cut my hair ! New style ! 4 days til my bday !”
What he really means:
“I’m going to go to my stylist, Perez Hilton recommended him to me, and he is going to try to squegee out the narsty Guido goop from my head so I can have a chance at picking up my famous friends sloppy seconds at my own birthday party.”

Welcome to WordPress.com. This is your first post. Edit or delete it and start blogging!