Cha-ching. I found my calling. This video gave me a semi.

Can you imagine how fucking amazing this trip would be? I can’t imagine anything better than Le Don and crew being on a yacht for a week straight and the only time I’m not baking in the sun or swimming in crystal clear water, I would be raging to some euro DJ with hundreds of girls that don’t speak my language. Honestly? Taking a yacht, that you get to choose, from port city to port city, only to get off and party with good looking, young people from across the globe? That is retardedly awesome and just the prospect of this trip makes me want to fist pump. I imagine by day 3 I would have ditched my friends and would probably wind up on some 100 footer with a group of college-aged Swedish girls who only know how to say “yes” and “that tickles”.

You have 3 choices of European cruising destinations: Ibiza, Greece, or Croatia. You also have a “Spring Break” B-squad option of doing the British Virgin Islands. I would obviously choose the Euro trip because of the accents and diversification of ethnicities, but also because I wouldn’t want to be competing for girls with guys that eat my bodyweight in protein everyday (guidos) in the BVI’s. Of course, you would have to be very stern and diligent in recruiting your deck mates. This part is vital. Obviously, the first rule is you can’t have any of your ugly friends allowed on the boat. That goes without explanation. Second, only bring friends that know how to keep shit a secret. Of course, you do want some stories leaked back to the United States, just to build on your already stellar social resume. But you don’t want Johnny Gossip on the boat with you because in most ridiculous vacays, there may be some not so yachty happenings that you don’t really want to be on the Facebook news feed when you return. Another guideline I’d probably go with is don’t bring any single girl friends on the trip with you. Chances are, on an off night when your getting drunk in a romantic harbor, that you and that single friend on the trip are going to bump uglies. Now this in itself is not a bad thing, but two days later when you’re in Port O’Debauchery banging out a spanish chick named Sophia, old friendo probably won’t appreciate it and might make for some drama for the rest of the voyage. Let’s keep things smooth.

One of your yachty options

All in all, it would cost about $3,000 to do this trip right, which is a bit on the steep side, but this isn’t JV tryouts either. Just picture yourself on the coast of Corfu wearing a sailor’s cap and drinking champagne on the deck of someone else’s yacht, while a group of topless french girls dance to Miley Cyrus’ “Party in the USA”. You just can’t put a price tag on that.

Oh my gosh, a whale with razor sharp teeth, predatory instincts, and a diet consisting of seals, porpoises, and other fish killed a human.

I’m never too shocked when these “tragedies” take place. Case in point, everyone is distraught when one of the gay magicians from Siegfried and Roy face was eaten by a tiger. Granted it was trained, but it was also a TIGER. Not known as the friendliest of beasts and if I were a tiger, I would probably want to murder the guy in queer tights and sequins that kept snapping a whip in my face.

Doesn’t this come with the territory? Isn’t part of the appeal and the trainers skill so intriguing because of the danger? You can’t play with a 12,000 pound whale and completely rule out the possibility of an accident. People wouldn’t pay the price of admission if the trainers were making salmon jump or riding the back of manatees. Media, get over the sensation. I see people get eaten all the time, granted I watch the full “Shark Week” DVD collection at least three times a week, but shit happens.

Now, I know most of you bitches that are reading this blog are excited about watching a show about a giant group of pathetic, desperate money grubbing females and one gigantic douchelord callled “The Bachelor”. Fret not my intelligent friends, you have other options on television. Starting last night, Discovery delved into it’s two part series “King Tut Unwrapped” which for the first time, the boy King’s DNA is mapped, his family is officially identified and his short life is investigated in detail. Since the groundbreaking discovery of his intact tomb in the Valley of the Dead in 1922, there has been an ever-increasing interest in King Tut, and ancient Egypt in general. Tonight will shed answers on many questions that have plagued scholars for decades.

If you missed the first half of the series, you can watch or record it tonight on Discovery Channel tonight at 6pm. Dr. Zahi Hawass, aka Dr. Egypt is a man who has built his life around egyptology and the mysteries surrounding King Tut and other famous ancient Egyptians. He is leading this study and now has the technology able to answer critical questions in understanding one of the most famous Pharaoh’s of all time. His distinctive voice may annoy the crap out of you, but give it 30 minutes or so and you’ll be picking up his dialect faster than your parents cleaning lady who you still don’t understand after 12 years of mopping and cleaning while you sit around and talk to her as a formality, knowing that you don’t understand one fucking word she is saying. The researchers on this show are genius, and I am certainly amped on finding out who King Tut’s real parents are. You never know, it could be your mom (ohhhhhhhh!). 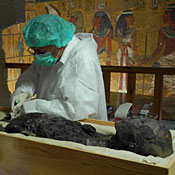 So set your DVR for 6pm & 8pm tonight and be ready to record 4 hours straight of awesomeness (only 2 if you were able to catch last night). I would probably have a couple of bowl packs ready so you can break it down in installments since it is lengthy, but be ready to find out some shit about little Tut that will make your head spin. Dr. Zahi Hawass and the Discovery team are ready to kick you in the nuts with some serious ancient Egyption knowledge so wear your jock strap.

There’s a new drink that has hit the streets, its purple, its supposed to make you lean (not ripped, lean like not standing straight you fools), and its been known to put people to sleep. No I’m not talking about liquid codeine you screw ups, I’m talking about the new beverage called “Drank”, that is the opposite of an energy drink. 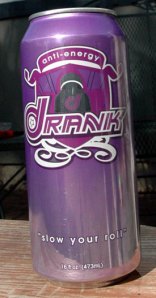 I kept hearing of this drink, “Drank”, from my friend Chip and he knows his shit so when I went by his crib yesterday, I stole a “Drank” on my way out. The can looks like one of those giant energy drinks that you only see fat kids and rednecks slurping out of. Inside, the concoction contains melatonin, Valeria root, and rose hips, all supplements to aid in relaxation and sleep. Despite having these weird ingredients , the drink literally tastes exactly like grape soda and if you don’t like grape soda then you probably kill baby seals.

So, on Sunday night I decided to try “Drank” and how see how I felt. The taste of the drink was almost as good as sex, but not quite. I must say, I did feel very relaxed and ready for a good nights sleep despite having the Sunday night blues after a long weekend. I wouldn’t say that I was on the same level of real liquid codeine and babbling like Lil Wayne, but I definitely felt loose and my eyes got more tired.

Fast Forward to this Morning: After drinking a “Drank”, I woke up on my couch after falling asleep to the Discovery Channel show “Ancient Aliens” (also awesome) and had to relocate my zombie self back into my own bed.

All in all, “Drank” tastes great, makes you relax, want to fall asleep, and is just about as close to liquid codeine as your hand getting slapped away from a bottle when your mom catches you trying to take it from the medicine cabinet. It certainly won’t do the trick if you are sick or have some serious anxiety problems, but for a night cap, “Drank” will do just fine.

In the meantime, grab yourself a can and tell me what you think and whether it works for you. I can’t wait til it catches on. Just imagine a bar full of people ordereing “Drank n Vodkas” all sitting around and drooling on themselves. Ha. Great mental image.

An ode to being able to dress as ridiculous as one wants, and still being able to pull girls. It’s almost as good as my upcoming debut rap song called “She’s Like Chick-fil-A on Sunday”. Don’t get any ideas haters, the song already features Justin Beiber, Miley Cyrus, and Lil Wayne so don’t try to cramp my cool with a knockoff– it won’t touch it.

People from Athens are eskimo brothers with kids from Boulder, Colorado. Both love to get down, are smarter than the average bear, are heady as shit, and spend their parents money like a trust fund baby on a coke binge.

You’re welcome for this video. Apparently, these kids slang ecstasy up in Boulder and make hilarious music videos with the proceeds of their “hobby”. Hence, their group name “The Connects”.

Based off of the fly Alife gear sprinkled throughout the video, the dance scene on the roof in front of the Fox Theatre (Boulder’s staple theatre similar to the Ga Theatre), the use of the word “boujie” followed by knock-off Coogi, and the sheer number of good looking girls in this school project video, I think it’s safe to say these guys get it.

“No f*cking clue how I’m getting these honey’s, looking like a f*cking zoo in my zebra onezie.” Genius.