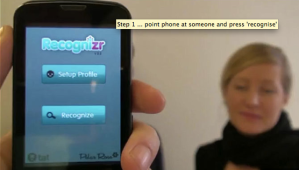 In technologies never ending quest of making reality take the back burner to social networking and virtual interaction, it has once again taken a step closer to hand shaking being obsolete, and stalking being that much more mainstream. “Recognzr” is a new iPhone app that lets you take a picture of someones face, hit “recognize”, then the app searches Facebook, Twitter, and Myspace for the person you just sketchily took a picture of.

In my awesome opinion, I think that walking up to someone with an outstretched hand as on offer of introduction is a more conventional and personable method, but what do I know, I don’t kidnap babies. How creepy can one get? How would you go about doing this? Act like your reading an email at eye level of the girl across from you on MARTA and totally play it off like nothing happened when it makes the camera shudder noise?

“Hey you look pretty cool, maybe we can be friends on Facebook, stand there while I take a picture of your face and my phone identifies you and where you live.” What normal girl wouldn’t love that? Seems to me like a device that would be great for a movie like “Hostel”. Eastern European dudes would go crazy for this app.

“Look, Vladimir, check out this great new opplication. Now, we can tell what country a tourist is from, their age, and better valuate their worth when we sell them as sex slaves.”

If this application makes any top 25 lists on iTunes, I’m putting extra locks on my doors. Creeps.

“Senior citizens, although slow and dangerous behind the wheel, can still serve a purpose.”

Old people are awesome. They are like children, but old. Plagued with innocence and armed with the reaction speed of a turtle, these senior citizens exemplify why all of society feels sorry for them.

Don’t get me started on the choir leader. That guy is a fucking cartoon character and should be tarred and feathered for this Borat-worthy performance.

If these old people knew the meaning of the words they were singing, they would probably implode. 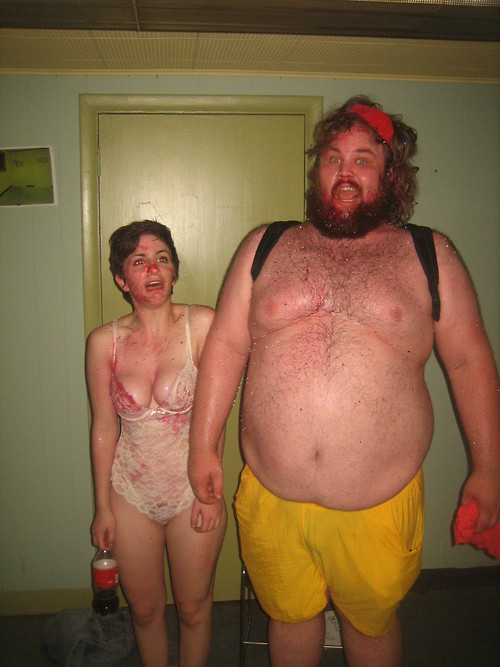 Beeeeeeeeeeeeaaaaaaaaaaaaaaaaannnnnnns! We all missed you and hope you didn’t subsequently die of an overdose after this picture was taken. I’m pretty surprised to see Beans with a female. I was under the impression that this guy mated with grizzly bears but apparently he dabbles with retarded girls, too. Look at her face, there is no way she doesn’t have a lisp and speak with a deaf persons voice.

I’m not even sure what to say about the red shit. 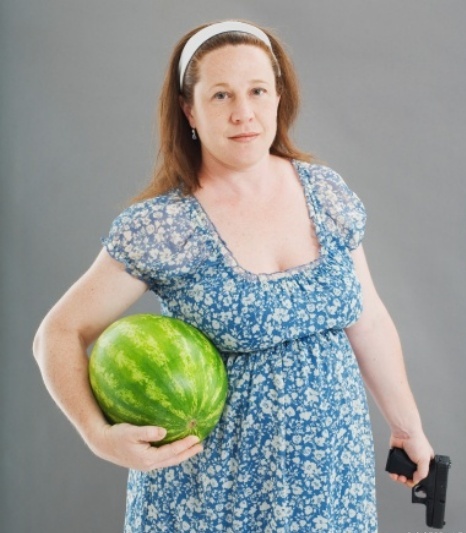 This picture is awesome. If I could have this pic blown up to at least 24″x36”, it would be hanging on the wall in my place. How can you not love a pregnant redneck woman holding a watermelon and a glock. Crazy white girl isn’t even smiling, which means she’s serious, which is scary.

“Dadgummit, I knew we were supposed to get our glamour shots taken today for our Daughters of the American Revolution scrap book, but I lef all ma props at the house.  All I had in ma truck was a big ‘ol watermelon and this here pistol.” 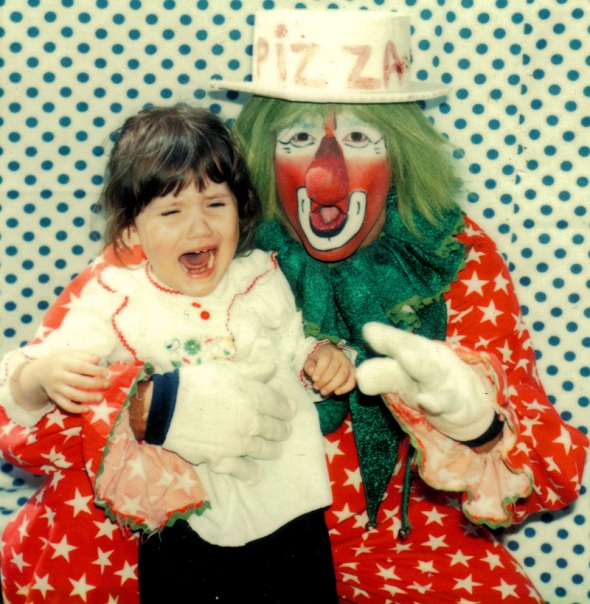 Everyone say hello to Pizza the Clown. This picture straight up gives me a bad feeling. It’s like a creepy version of a picture that you’d see on the wall at Chili’s. Who the fuck becomes a clown anyways? It’s definitely the creepiest of all professions. You dress up like a fag, you name yourself something ridiculously stupid, and your job is to be with kids all day. Sketchy. I don’t know about you guys, but  I’ve always hated clowns with a passion. Talentless hobos, all they have to do is sit there and look stupid. My dog can do that. I would feel a lot safer if a dog were around my kids instead of this fucking douche with a testicle as a nose.

If you watch this clip from “Hot Rod” and don’t laugh, then you probably are about as much fun as a quadriplegic at a dance party. 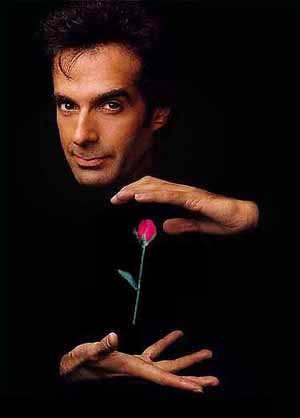 So, apparently he can’t really make magic happen. As if we already didn’t think magicians were creepy enough, David Copperfield had to go and rape a chick. Congrats, you’re the richest man ever to not be able to get laid.

David Copperfield met a girl while doing a show in Washington state, and invited the poor girl to his private $50 million dollar island to a promotional event that could lead to “modeling opportunities”. I have to say, most girls I know would’ve noticed the transparent desperation in such an invitation from a 52 year old man, but they all can’t be geniuses can they?  She accepted the invitation and much to her surprise, she arrived on the island to find that it was only Copperfield there?!?

Come on, man. You’re a fucking magician. At least have some fire breathers in the front yard or some elephants walking around to distract the girl from the obvious. Maybe just hire some locals to hang out in the lawn and act like you have friends? I don’t know, but I do know that if I asked some chick to come to a promotional event, and she showed up to an empty island, the alarm bells would probably start ringing.  Apparently, she tried to call her boyfriend once she realized what the business was, and the magician pulled a Ben Stiller from “Happy Gilmore” and told her that if she called anyone, that he would murder her.  David even went as far as making her go under water naked in the ocean and when she surfaced, he told her that’s where she would stay if she told anyone??? WTF is wrong with you, Magic Man. Not legit. I do question the decision making ability of a girl that goes to magic shows at the age of 22, but that’s besides the point.

The point is that David Copperfield had to threaten this young girls life and assault her in order for her to have sex with him. Honestly? How weak is your game Coppafeel? You own a private island. You’re the most famous magician since Harry Houdini. You’re a good looking guy for your age. Your ex-wife is Claudia Schiffer. You can make people fucking disappear,  but you can’t find a girl that will have consensual sex with you?!? That sauce is most certainly weak you creepy fuck.

Good luck making this one disappear, David. I wonder how long it will take you to break out of the shackles and chains that you’re about to be in? My guess is about 5-10 years.

“You’ve seen Lord of the Rings, We Live It”

I think I found my new group of people to prank call and harass. Check out my homies at Dagorhir.com.

Have you seen Role Models? If so, you would probably remember McLovin from Super Bad being a creepy tool that rocked a cape, a foam sword, armor, and lived in a fantasy world with other rejects. These fucking losers have battles where there are actual rules, regulations, and fantasy hierarchies.  Well my friends, these creepsters actually exist and they have chapters across the nation. What the fuck.

I know some people out there love them some Lord of the Rings, but I wasn’t aware that people that drive KIA’s and smoke Doral’s actually live double lives as Frodo Baggins. I mean do they keep it a secret from their coworkers at Burger King? Do they recruit? I mean these fuckers have girlfriends in their fantasy worlds. AKA They have sex as Samwise Gamjee, getting off to the thought of boning some elf. Yeah, I just went there, but it needs to be brought to peoples attention. These dwarf fuckers houses should be put on a map, just like sexual offenders. 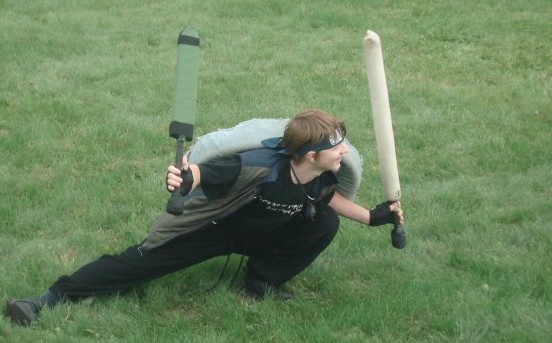 "Thad shows his prowess in a ready stance"... and the grease in his hair from playing video games for a week straight with no shower... nice gloves bro

For all you nerds out there that got blackballed by Lambda Lambda Lambda, the clan of ye Atlanta realm, The High Spires, are looking for warriors in the Atlanta area. I hear they are a mighty strong chapter with many a brave lad. They have an online forum, with 3 total brave soldiers in the entire message board.  They also smoke pole. I know some people get lonely or sometimes get caught up in things that they shouldn’t, but  I would probably rather become a meth head than hang out with these hobbits.

I knew a kid at UGA whose name was Kelvin. Kelvin carried around the Lord of the Rings (hardback version), had long bleach blonde hair, wore a leather headband, and majored in Native American Religion. He told me that his favorite thing to do was to climb up into a tree, read a book, and enjoy nature after eating a bunch of mushrooms. As normal as that sounds, I think ‘ol Kelvin could certainly be a Dagorhir suspect.

The Atlanta Chapter of Dagorhir, excuse me The High Spires, have practice at 1pm every Sunday at Blackburn Park. If you have any questions pertaining to practice or Dagorhir, you can email Athron@dagorhir.com. Athron, hmmm, I would be pissed. That name was apparently given to him by his father, the Prince of Rohan.

Anyways, if anybodys down to go bully some losers at Blackburn Park on a Sunday after Church, hit me up.

For further entertainment,  go HERE, and check out the Aethenu chapter and all their pictures and rules… pretty fucking awesome…