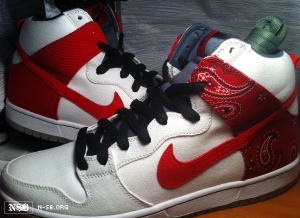 As the holiday season approaches, the weather getting colder serves as a reminder to gear up on the freshy fresh that will last you from November to March. I always like winter time because it gives one the chance to get kitted out from head to toe. Don’t get me wrong– I love the summer-time steez of rocking tee’s or sportshirts with shorts and matching sneaks, but winter is the time to take that shit to the next level, ése. Tweed, houndstooth, suede, cashmere, wool, and neutrals combined with nontraditional colors is the Looker T. Washington this winter. Jackets, vests, sweaters, hoodies with bomb tee’s or dress shirts from the waist up, cords or jeans with shoes to match the shirt from the waist down, and some sort of head covering mechanism to finish the fuckin drill. What I’m going to do next is drop some knowledge on you suckas about shoes that are being released this month. Take a seat by the fire and let Le Don show you how to keep those Christmas socks covered in something fresh.

BAM, just like that you got some heaterbockles that everyone can appreciate. Asics are underrated in my awesome opinion and these are super serial and a quality addition to any closet. These Asics GT-II Tweed Packs have the old-school Fratty McFratterson appeal, while keeping the colorway variance dope enough to catch someones eye, without being too much. These kicks are as versatile as you want them to be. Dress them up with a button-down and cord blazer, or dress them down with a hoodie and a Bill Crispy tee. Either way, these are heaters have just enough “umph” to put some bourbon in your nog.

Fuck your Dad’s boat shoes and your frat bros Wallabee’s. Get emo on some folk and drop the Vans Chukka on that ass to let them know you’re not a number. These neutrals will kill in any setting. I’d even consider taking these on the feet to church on Christmas Eve with a heady holiday sweater and a mustache. Get on these steezers and remix your traditional footwear with something new. Classic appeal FTMFW.

Cop these bad boys if you like a hot sauce on your collard greens. Nike SB is cracking down on the wackness that had been plaguing most of their 2009 droppings and finishing off the year right with their November and December releases. These Nike SB Dunk Low “UnHemps” look like a sex baby between the Dunk SB  “Hunters” and the Dunk SB “Hemps”. The mellow tone of the hemp combined with the “don’t-shoot-me-i’m-hunting” orange make one rad shoe for the sneaker enthusiast. Definitely not as versatile as the others on this list, but are an absolute smash if you want to turn some heads. I don’t know about you, but I always walk a little easier knowing that I have industrial grade marijuana on my feet.

Come correct to your next black tie event or holiday party with a classy pair of evening slippers to go along with your cocaine and caviar. A great friend of mine in Miami, Florida started this company, Del Toro Shoes, with Stubbs & Wooton in mind, but offers his high quality shoes at about 1/4th of the price. Easy to dress down to casual with jeans and a blazer, these slippers are more versatile than one might think. Offering dozens of emroidered designs and customizable options, you can add your own touch to any pair of Del Toro’s. Raise your pinky when you drink that Champagne and get yachty this New Year’s Eve with this timeless style that is rarely seen in the South.

Spaulding, take your foot off the boat.

What is it with the riots? Chill out you crazy fucks.

After the Los Angeles Lakers became the NBA Champions on Sunday night, a ridiculous riot ensued that completely fucked up the area surrounding the Staples Center. Eleven people were arrested, two cop cars were set ablaze (awesome), and a dope sneaker store was raped by a bunch of hooligans that can’t handle their shit.

The Holy Grail, a consignment boutique of rare and vintage sneakers, was bent over by Lakers fans following  their Championship victory over the Orlando Magic. Not only is this a sticky situation because their store was pillaged, but also because all the inventory at the store was on consignment (they were selling them for other people, and taking a percentage). Thousands of dollars worth of the dopest shoes on the planet are now on the feet of reckless thieves. Not only is this an outrage because of the obvious, but also because these shoes will probably get scuffed.

When the Lakers take win, Imma get dem Yeezys!

There’s one thing I never understood. Why the hell do people riot when something good happens? I just don’t get it. I’m all for a debaucherous night of fuzziness on a celebratory night, but those crazy fuckers in L.A. just took things too far. My idea of a celebration usually ends with a blackout where I wake up in my clothes that I wore the previous night, a pocket full of ridiculous bar tabs, a beer on my bedside table with one sip taken out of it, and the lights still on. 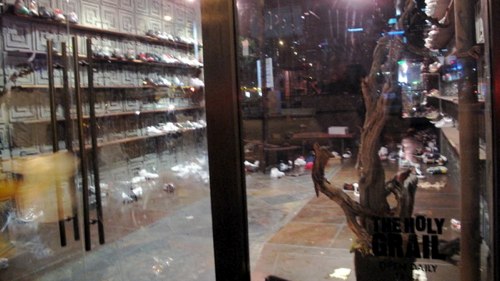 Come on America, let’s keep it classy when we celebrate. Get drunker than Tara Reid,  smoke some cheeb, and get naked with a stranger, but leave the violent riots for South American soccer games.