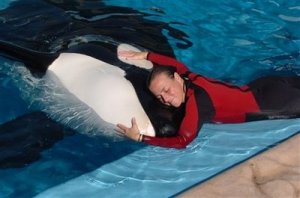 Oh my gosh, a whale with razor sharp teeth, predatory instincts, and a diet consisting of seals, porpoises, and other fish killed a human.

I’m never too shocked when these “tragedies” take place. Case in point, everyone is distraught when one of the gay magicians from Siegfried and Roy face was eaten by a tiger. Granted it was trained, but it was also a TIGER. Not known as the friendliest of beasts and if I were a tiger, I would probably want to murder the guy in queer tights and sequins that kept snapping a whip in my face.

Doesn’t this come with the territory? Isn’t part of the appeal and the trainers skill so intriguing because of the danger? You can’t play with a 12,000 pound whale and completely rule out the possibility of an accident. People wouldn’t pay the price of admission if the trainers were making salmon jump or riding the back of manatees. Media, get over the sensation. I see people get eaten all the time, granted I watch the full “Shark Week” DVD collection at least three times a week, but shit happens.